Youth were informed this week that if they decided to strike, their absences would not be excused, while many schools across the country pre-emptively declared that they would not punish the students for striking for the future.

So, Zoe Schurman hit the pavement for her fellow students. Although she knows her parents would gladly get her an excused absence, she knows this option is not available to all students, and that many of the students least able to get assistance with an excused absence are also the youth that need to have their voices heard.

She was up early for a press conference at her school with City Council Member, Kshama Sawant, and then after school she used city transit to make it down to the school board to plead the case of her fellow students.

The Superintendent has not announced an intention to help the students, even though Seattle City Council unanimously endorsed the walkout last week.

A petition was created to support the students – sign here! 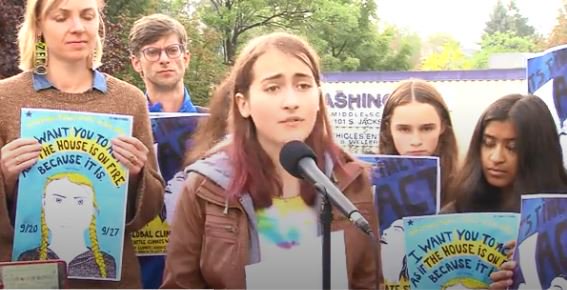 “Act like our world is on fire, because it is.”